This article was written by Diovanie De Jesus, Oceana Campaign and Science Specialist.

Imagine an upside-down jellyfish with its tentacles up to gather food from the water and its body inside a calcium carbonate exoskeleton—that’s a coral polyp. Living within it are microscopic algae, the zooxanthellae, which help provide food to the coral through photosynthesis. These coral polyps are cemented side by side and form the coral colony. Coral colonies, when put together, build a coral reef.

This labyrinth of corals forms a diverse ecosystem, often called the “rainforests of the sea”. It hosts numerous species of marine life from invertebrates like sponges, mollusks, and crustaceans to fish and reptiles – all of which find food and shelter in it. Other marine ecosystems like seagrass, mangroves and the open sea, are connected to it.

Coral reefs, however, are in the state of decline because of threats from local human activities such as overfishing and destructive fishing, coastal development, watershed-based pollution and marine-based pollution and damage. These threats have caused the decline in fisheries production for coral reefs in the Philippines since the 1970s.

The establishment of marine protected areas (MPAs) have been proven as effective means to improve the health of coral reefs by increasing coral cover and diversity as well as fish diversity, abundance, and biomass. MPAs have also improved the fisheries of adjacent areas through the spillover effect where the increased number of fish inside the no-take zones in MPAs migrate to adjacent areas where they can be fished.

Aside from fisheries, coral reefs also provide other ecosystem services such protection from waves, source of medicine, and tourism and recreation. Reefs are not simply beautiful – their significance goes deep beyond their appearance. They provide a whole lot of services – to small organisms, larger marine animals, and even us humans – making them of paramount importance to the whole marine ecosystem. As the world is in a state of climate crisis, now more than ever, do we need to restore our reefs into a healthy state. Coral reef restoration is slow and time intensive. The impact of saving dying coral may not be felt immediately but it is a task of great urgency and a legacy we will be passing on to future generations. 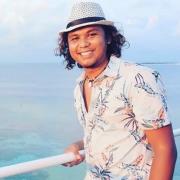 Diovanie “Diuvs” de Jesus is our marine scientist who graduated with a master’s degree in marine science, major in marine biology. He worked as a research associate at the Marine Science Institute, University of the Philippines.  He is one of the few who have seen and experienced the outstanding beauty and vibrancy of the deep see corals found in the underwater seamounts in Benham Bank/Philippine Rise.