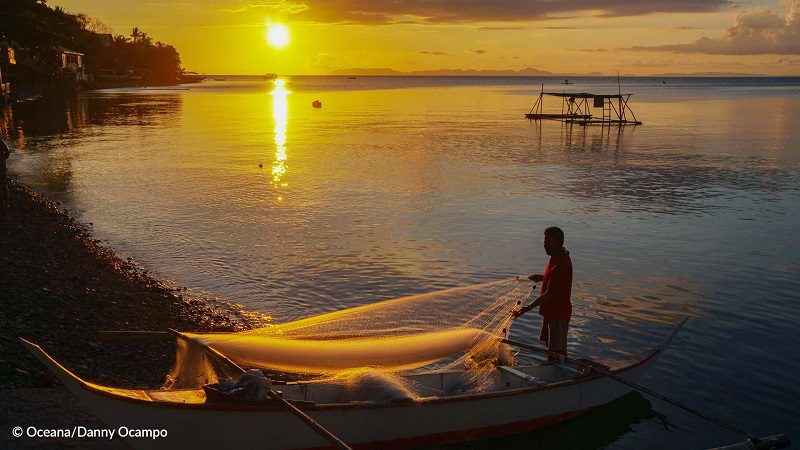 This was the sentiment raised by the different fisherfolk groups as they call on the Department of Agriculture (DA) and the Bureau of Fisheries and Aquatic Resources (BFAR) to uphold its mandate to implement the vessel monitoring system and requires its installation in all commercial fishing vessels as prescribed by Republic Act 10654 which amended the Fisheries Code, and Fisheries Administrative Order (FAO) 266.

Fisherfolk, coastal local governments and Oceana have previously called the attention of DA-BFAR in the slow implementation of the vessel monitoring measures.

“We are alarmed that intrusion of commercial fishing vessels in municipal waters remains pervasive due to slow implementation of measures that are in the Philippine Fisheries Code, as amended by Republic Act 10654.We waited for five years for the rules on vessel monitoring measures to apply to all commercial fishing vessels to be issued. We will not allow continuous neglect even as we know that our poor artisanal fisherfolk suffer because our fisheries resources are pillaged by the illegal intrusion of commercial fishing in municipal waters,” said Oceana Vice President Gloria Estenzo Ramos.

Gupong called on the other fisherfolk to continue fighting for their preferential right to fish in the municipal water. “The vessel monitoring system is an important tool to ensure that commercial fishing operators will not enter municipal water,” he added.

The municipal water is the critical 15-kilometer zone from the shoreline of our oceans that is the spawning ground of our fish and their habitat. Commercial fishing vessels are prohibited from entering the municipal water, according to the Fisheries Code, as amended.

In a recent news report, Solicitor General Jose Calida reportedly advised the Bureau of Fisheries and Aquatic Resources (BFAR) and the National Telecommunications Commission (NTC) to comply with the ruling of the Malabon City Regional Trial Court (RTC) that declared Fisheries Administrative Order No. 266 as unconstitutional.

Stakeholders view the OSG’s new legal opinion with deep concern as it is a complete reversal of its earlier position that the BFAR and NTC can still implement FAO 266 and direct commercial fishing operators to install the vessel monitoring devices in view of the pendency of the appeal before the Supreme Court against the trial court ruling.

Based on the records of the Bureau of Fisheries and Aquatic Resources, only 257 commercial fishing vessels registered under the jurisdiction of Malabon and Navotas are covered by the order of the Malabon Regional Trial Court. This is only five percent of the total 3,0775,156 commercial fishing vessels nationwide that should have vessel monitoring system as required in the Fisheries Code, as amended, and as ordered in FAO 266.

Moreover, RA 10654, or the amendatory law to the Fisheries Code prohibits trial courts from issuing injunctions, as provided under Section 134.

“Section 134. Prohibition on the Issuance of Temporary Restraining Orders, Preliminary Injunctions, and Preliminary Mandatory Injunctions. – No injunction or restraining order from the Municipal Trial Courts and Regional Trial Courts shall lie against the Department and BFAR upon the ex parte motion or petition filed by any person or entity in the exercise by the Department and BFAR of its regulatory functions in support of the implementation of this Code.”

The prohibition against the enforcement of environmental laws is further reiterated in the Supreme Court’s own rules on environmental cases, and the Office of the Court Administrator’s Circular No. 87-2016.

Oceana Vice President Atty. Gloria Estenzo Ramos emphasized that Republic Act 10654 was enacted to stop, deter and fight illegal, unreported and unregulated (IUU) fishing and as a response to the yellow card warning imposed by the European Union in 2014 that the government measures to fight IUU fishing were inadequate. The law requires vessel monitoring technology in all commercial fishing vessels as a requirement for registration and renewal thereof. RA 10654, if fully implemented, strengthens the implementation of the constitutional provision guaranteeing the preferential right of artisanal fisherfolk in municipal water by prohibiting commercial fishing operations within the 15-kilometer from the shoreline.

After FAO 266 was signed, Congressman Pablo John Garcia of Cebu filed House Bill 7853 to allow commercial fishing in municipal waters. This was vehemently opposed by multi-sectoral groups as this spells the collapse of fishing grounds, 2/3 of which are already overfished, and a gross violation of the preferential rights of the artisanal fisherfolk and displaces further the fisherfolk.

“Is the Office of the Solicitor General advising the DA-BFAR not to perform their clear mandates under the laws?  Trial courts have no power to issue injunctions in the enforcement of fisheries laws. We join the fisherfolk groups in calling on Agriculture Secretary Wiliam Dar and BFAR Director Eduardo Gongona to comply with their duty the implement the law, protect our municipal water and our municipal fisherfolk,” Ramos added.

Likewise, Oceana calls on the DA-BFAR to make public and accessible the Fisheries National Administrative Register. RA 10654 provides as follows:

Section 140. Fisheries National Administrative Register. – The Adjudication Committee shall enter in a Fisheries National Administrative Register, which shall be publicly available, all decisions, resolutions or orders involving violations of this Code, particularly serious violations committed by Philippine flagged vessels or by Philippine nationals and cases on poaching or involving foreigners, including the penalties imposed.”

Oceana is an international advocacy organization dedicated to protecting the world’s oceans. Since 2014, Oceana has been working closely with national and local government agencies, civil society, fisherfolk and other stakeholders to restore the abundance of Philippine fisheries and marine resources. (END)