International advocacy group Oceana and artisanal fisherfolk are calling on the country’s incoming administration to continue the reforms made in the fight against illegal commercial fishing in municipal waters to attain food and nutritional security and alleviate the worsening poverty in coastal communities all over the country.

“While the outgoing Duterte administration has made considerable progress in efforts to restore our ocean’s abundance, much still need to be done to attain food security in the Philippines amidst the global challenges affecting our climate, fuel and basic commodities. Our municipal waters can be a major source of protein again for the Filipino people. But in order to do that, the government must continue to protect our fragile marine habitats, and the preferential rights of our artisanal fishers to the municipal waters,” said Atty. Gloria Estenzo Ramos, Vice President of Oceana, during the launch of the Atin ang Kinse campaign at B Hotel.

The Duterte administration’s legacies include the promulgation of the  rules for vessel monitoring for all commercial fishing vessels, Fisheries Compliance Audit for coastal cities and municipalities and validation protocol initially in Manila Bay,  policy issuance narrowing the gap in the implementation by local governments of the Philippine Environmental Impact Assessment Act and related laws for the protection of environmental rights, the promulgation of the National Sardines Management Plan, the declaration of a portion of the Philippine Rise including Benham Bank as a marine resource reserve, and the establishment of 12 science-based and participatory Fisheries Management Areas where artisanal fisherfolk are represented in the respective Management Body.

The Fisheries Code, as amended (RA 10654) designates the 15-kilometers from the shoreline as municipal waters which are reserved for the exclusive access and use of artisanal fisherfolk.

The Department of the Interior and Local Government under the leadership of Secretary Eduardo Año required the coastal local governments in the hotspot list where the municipal waters have the most night light detection of apparent illegal fishing activities s to explain how they are enforcing fisheries laws and regulations.

“It is unfortunate that despite the progress made in strengthening efforts in the fight against illegal fishing, commercial fishers continue to brazenly encroach on municipal waters and violate the law. We call on the incoming administration to file cases against offenders, cancel the licenses for repeat violations as the law so mandates, and stop them from further pillaging our marine resources and reduce the fish catch of artisanal fisherfolk in municipal waters,” Ramos urged. 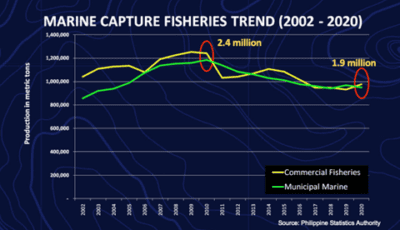 This is supported by data from Karagatan Patrol, a boat detection platform established by Oceana and the League of Municipalities of the Philippines in 2019 to monitor commercial fishing vessels’ apparent intrusion in municipal waters.

“In 2020, the Philippine Statistics Authority (PSA) reported that fisherfolk were still among the poorest of Filipinos along with farmers and individuals residing in rural areas. This year, the International Year of Artisanal Fisheries and Aquaculture, we urge the government to put an end to commercial fishers’ continued violation of our laws and our artisanal fisherfolk’s rights as guaranteed in our Constitution and Amended Fisheries Code,” said Ramos.

Oceana is an international advocacy organization dedicated to protecting the world’s oceans. Since 2014, Oceana has been working closely with national and local government agencies, civil society, fisherfolk and other stakeholders to restore the abundance of Philippine fisheries and marine resources. [END]