We Can Save the Oceans to Feed the World

Many of the seven billion people today (including you hopefully) will share the world with another two billion by 2050. Theoretically, our survival is hinged on a simple equation: we must produce enough food to feed everyone three squares daily.

The problem is that 925 million or about one in seven mouths are already going to bed hungry tonight. The natural systems we rely on for food are assailed by overuse, pollution and climate change.

Farming, humanity’s main food generator, requires lots of water, fertilizer and farmland – something we’re running out of unless we cut down our remaining forests. It’s also a major driver of climate change – emitting more greenhouse gases than all the world’s cars, trains and aircraft combined.

Aquaculture is a solution, but still requires huge amounts of feeds and can introduce ravenous invasive species like tilapia and golden kuhol which can wipe out native aquatic life. So which food production system requires no fresh water, fertilizer or farmland?

The oceans. Covering 71% of the planet, the big blue turns sunlight and nutrients into plankton, fueling the creation of vast shoals of fish. Enough to feed ocean giants like tuna, sharks and whales. Enough to feed you and me with leftovers aplenty.

“Wild fish are the world’s most cost-efficient protein source. They are renewable, low-carbon and much cheaper to produce than chicken, pork or beef,” explains Oceana Philippines head Atty. Gloria Estenzo Ramos.

Oceana is the world’s largest nongovernment organization working to conserve the world’s seas. It was created from the realization that oceans produce food for free – and that 25 nations produce 90% of the world’s seafood. “If we can reduce overfishing, prevent bycatch and protect vital marine habitats in these 25 countries, then we can rebuild the world’s fish stocks,” adds Ramos.

Oceana’s famed battle-cry, a clarion-call for good fisheries governance, is now heard in boardrooms, fishing villages and other hubs in a hundred nations: save the oceans, feed the world.

So please help save our oceans this Earth Day. Log on to ph.oceana.org to know how. 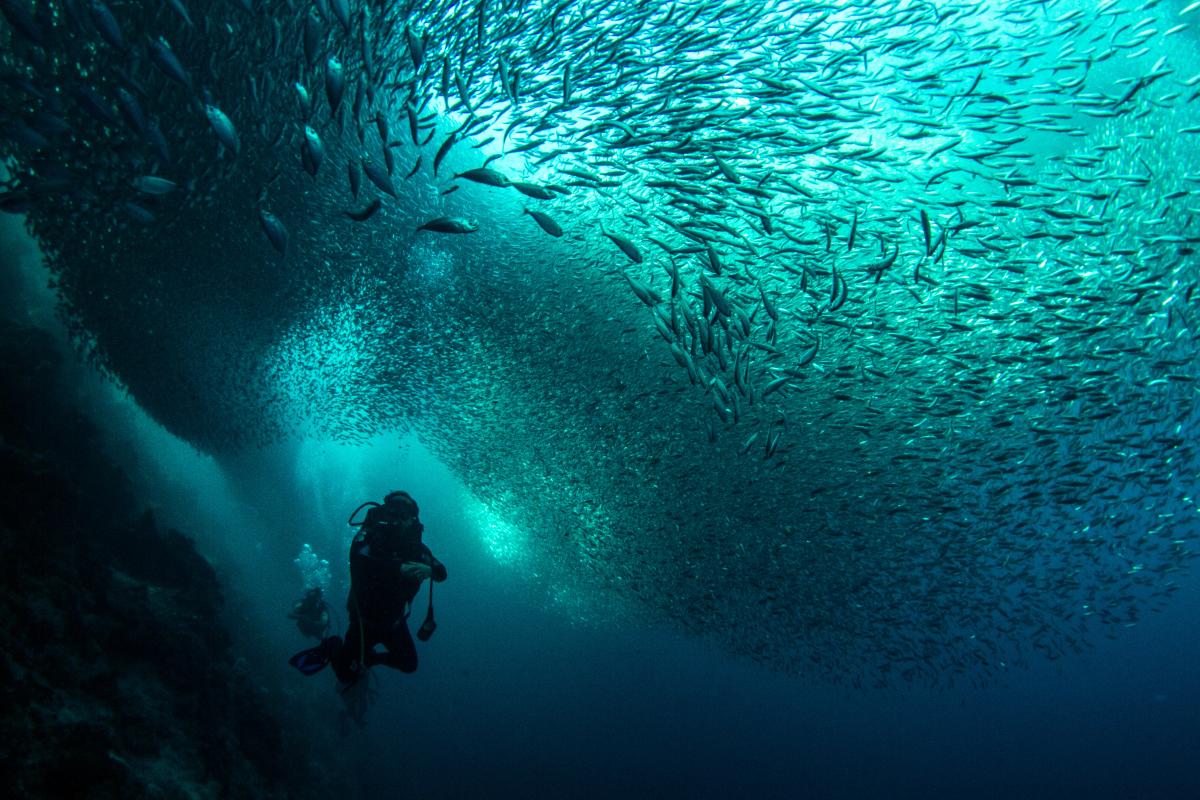 A vast shoal of sardines surround a diver in the Visayas. The Philippines is part of the Coral Triangle, the world’s most biodiverse marine area. According to the Philippine Statistics Authority, the country produces an average of 355 thousand metric tonnes, worth 10.45 billion Pesos of wild sardines alone. Properly tended, our oceans can produce incredible amounts of food. (Oceana / Ferdinand Edralin)

Wild seafood is the world’s most cost-efficient protein source, cheaper to produce than chicken, pork or beef. (Gregg Yan)